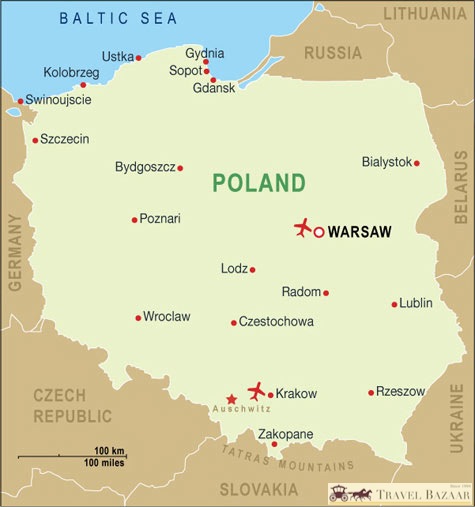 Desperately trying to rid itself of its old Communist cloak, Poland has risen from the ashes as an increasingly popular tourist destination. Krakow has been vaunted for a few years now as the “new Prague” and any visitor to the city can see why. Fortuitously avoiding much of the destruction of WWII that reduced many neighbouring cities to rubble, the ancient capital of Poland is indeed an example of an unblemished medieval city, with magnificent architecture and charming old streets lined with pretty houses and churches.

Less well known are the attractive ancient town of Kazimierz Dolny, popular with artists, and the old quarter of the city of Wroclaw, divided up by the river and crammed full of beautiful churches. Even the capital, Warsaw, has had an impressive facelift, with much of the historic centre having been carefully rebuilt in the original medieval style as well as boasting some interesting Communist-era buildings, now historical curiosity pieces in their own right.

Many visitors are surprised to discover that Poland is a country full of striking natural scenery. The country possesses the last remaining primeval forest in Europe, Bialowieza, a beautiful area of wooded countryside home to the rare European bison. More stunning to many are the enormous sand dunes of Slowinski National Park on the Baltic Coast, some of them reaching over 45m in height. And in the South, the Tatra Mountains provide numerous opportunities for skiing and hiking.

Far from being full of grey, Communist-era tower blocks (though of course some of these do remain), Poland has many unique facets – both natural and man-made, so make sure you beat the crowds and get there sooner rather than later.

Because we take care of all your travel needs? We have over 100 years of experience? Or is it because our Directors are passionate travellers with a hands on approach?

Customized. Just for you.

Holidays are personal. Every traveller has their own budget, tastes & preferences. With this in mind, our Customized Holidays are created from scratch just for you and offer independence, flexibility and value for money.

At Travel Bazaar, we take pricing and quality very seriously. With nearly two decades as one of the most trusted travel brands in India, you can be sure that we always offer you the finest quality at the best prices.